Description of the project 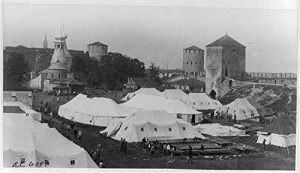 The project seeks to remind European citizens about the work of Fridtjof Nansen, as an example of Europeanism and intensive work for a better society, working on 3 main pillars:

1- Repatriation of war prisoner 1919-1922 as a period of arduous struggles for peaceful coexistence in east Europe when the Russian Civil War affected the whole area. Forgotten war prisoners from the WWI were repatriated thanks to a common effort led by Nansen with the result of 427,886 prisoners relocated to around 30 different countries.

2- The second pillar of the project is based on Nansen’s involvement as the League of Nations High Commissioner for Refugees; His main brief was the resettlement of around two million Russian refugees displaced by the upheavals of the Russian Revolution.

3- The third pillar, humanitarian aid link with the famine in Russia, mainly organized by Nansen, targeted millions of lives, even though the Soviet Authorities limited its impact. The great famine of 1921 in Russia provoked a wide humanitarian movement in Europe and America. While Soviet Russia remained diplomatically isolated until 1924, the nongovernmental humanitarian organizations played a significant role in establishing contacts on both sides of the cordon sanitaire. The International Relief Committee to Russia and the “Nansen Mission,”, appeared to be among the most far-reaching in their dealings with the Bolsheviks during the Bolshevik-led international relief campaigns to Russia in the early twenties.

The project aims to strengthen the contemporary commitment of the European citizens to the preservation of the principles defended by Nansen, as common approach to common problems, support to refugees and humanitarian aid, while fostering the transnational dialogue of the European citizens about the actions of Nansen and its consequences. The project increases awareness among the citizens about the similarities in the current European Union, solidarity is needed for creating a more cohesive and fair society. Thereby, it contributes to the strengthening of European identity. Furthermore, the project fosters a resilience against contemporary populist narratives based on the promise of a return to the allegedly “better past”. It settles clear examples of how the Europeans were able to solve common problems with common positions led by Nansen that, in many cases, are still priorities for the European Citizens, as movements of population, refugees and humanitarian aid.