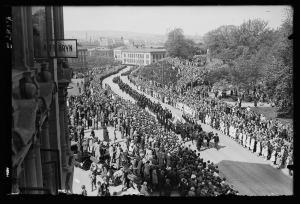 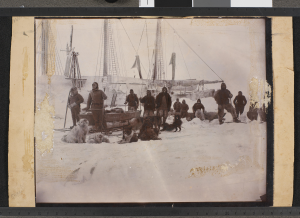 Fridtjof Nansen (October 10, 1861-May 13, 1930) was born at Store Frøen, near Oslo. His father, a prosperous lawyer, was a religious man with a clear conception of personal duty and moral principle; his mother was a strongminded, athletic woman who introduced her children to outdoor life and encouraged them to develop physical skills. And Nansen’s athletic prowess was to prove of the utmost importance to his career. He became expert in skating, tumbling, and swimming, but it was his expertise in skiing that was to play such a large role in his life. Not massively built, Nansen was tall, supple, strong, hard. He possessed the physical endurance to ski fifty miles in a day and the psychological self-reliance to embark on long trips, with a minimum of gear and only his dog for company.

In school Nansen excelled in the sciences and in drawing and, upon entering the University of Oslo in 1881, decided to major in zoology. In the next fifteen years he united his athletic ability, his scientific interests, his yearning for adventure, and even his talent for drawing in a series of brilliant achievements that brought him international fame.

In 1882 he shipped on the sealer Viking to the east coast of Greenland. On this trip of four and a half months, the scientist in him made observations on seals and bears which, years later, he updated and turned into a book; but at the same time the adventurer became entranced by this world of sea and ice.

Obtaining the post of zoological curator at the Bergen Museum later that year, Nansen spent the next six years in intensive scientific study, punctuating his work with visits to some of the great laboratories on the Continent and once by an extraordinary trek across Norway from Bergen to Oslo and back on skis. In 1888 he successfully defended his dissertation on the central nervous system of certain lower vertebrates for the doctorate at the University of Oslo.

For a long time Nansen had been evolving a plan to cross Greenland, whose interior had never been explored. He decided to cross from the uninhabited east to the inhabited west; in other words, once his party was put ashore, there could be no retreat. In 1926, explaining his philosophy to the students at St. Andrews in his rectorial address, Nansen said that a line of retreat from a proposed action was a snare, that one should burn his boats behind him so that there is no choice but to go forward. The party of six survived temperatures of -45° C, climbed to 9,000 feet above sea level, mastered dangerous ice, exhaustion, and privation to emerge on the west coast early in October of 1888 after a trip of about two months, bringing with them important information about the interior.

In the next four years, Nansen served as curator of the Zootomical Institute at the University of Oslo, published several articles, two books, The First Crossing of Greenland (1890) and Eskimo Life (1891), and planned a scientific and exploratory foray into the Arctic. Basing his plan on the revolutionary theory that a current carried the polar ice from east to west, Nansen put his ship, the Fram [Forward], an immensely strong and cunningly designed ship, into the ice pack off Siberia on September 22, 1893, from which it emerged thirty-five months later on August 13, 1896, into open water near Spitzbergen. Nansen was not aboard.

Realizing that the ship would not pass over the North Pole, Nansen and one companion, with thirty days’ rations for twenty-eight dogs, three sledges, two kayaks, and a hundred days’ rations for themselves, had set out in March of 1895 on a 400-mile dash to the Pole. In twenty-three days they traveled 140 miles over oceans of tumbled ice, getting closer to the Pole than anyone had previously been. Turning back, they made their way southwest to Franz Josef Land, wintered there in 1895-1896, started south again in May, reached Vardo, Norway, the same day the Fram reached open water and were reunited with the crew on August 21 at Tromsø.

The voyage was a high adventure, but it was also a scientific expedition, the Fram serving as an oceanographic-meteorological-biological laboratory. Holding a research professorship at the University of Oslo after 1897, Nansen published six volumes of scientific observations made between 1893 and 1896. Continuing thereafter to break new ground in oceanic research, he was appointed professor of oceanography in 1908.

Nansen interrupted his research in 1905 to urge the independence of Norway from Sweden and, after the dissolution of the Union, served as his country’s minister to Great Britain until May of 1908. In the next few years he led several oceanographic expeditions into polar regions, but once the world was plunged into war in 1914 and exploration was halted, he became increasingly interested in international political affairs.

For almost a year in 1917-1918, as the head of a Norwegian delegation in Washington, D. C., Nansen negotiated an agreement for a relaxation of the Allied blockade to permit shipments of essential food. In 1919, he became president of the Norwegian Union for the League of Nations and at the Peace Conference in Paris was an influential lobbyist for the adoption of the League Covenant and for recognition of the rights of small nations. From 1920 until his death he was a delegate to the League from Norway.

In the spring of 1920, the League of Nations asked Nansen to undertake the task of repatriating the prisoners of war, many of them held in Russia. Moving with his customary boldness and ingenuity, and despite restricted funds, Nansen repatriated 450,000 prisoners in the next year and a half.

In June, 1921, the Council of the League, spurred by the International Red Cross and other organizations, instituted its High Commission for Refugees and asked Nansen to administer it. For the stateless refugees under his care Nansen invented the «Nansen Passport», a document of identification which was eventually recognized by fifty-two governments. In the nine-year life of this Office, Nansen ministered to hundreds of thousands of refugees – Russian, Turkish, Armenian, Assyrian, Assyro-Chaldean – utilizing the methods that were to become classic: custodial care, repatriation, rehabilitation, resettlement, emigration, integration.

The Red Cross in 1921 asked Nansen to take on yet a third humanitarian task, that of directing relief for millions of Russians dying in the famine of 1921-1922. Help for Russia, then suspect in the eyes of most of the Western nations, was hard to muster, but Nansen pursued his task with awesome energy. In the end he gathered and distributed enough supplies to save a staggering number of people, the figures quoted ranging from 7,000,000 to 22,000,000.

In 1922 at the request of the Greek government and with the approval of the League of Nations, Nansen tried to solve the problem of the Greek refugees who poured into their native land from their homes in Asia Minor after the Greek army had been defeated by the Turks. Nansen arranged an exchange of about 1,250,000 Greeks living on Turkish soil for about 500,000 Turks living in Greece, with appropriate indemnification and provisions for giving them the opportunity for a new start in life.

Nansen’s fifth great humanitarian effort, at the invitation of the League in 1925, was to save the remnants of the Armenian people from extinction. He drew up a political, industrial, and financial plan for creating a national home for the Armenians in Erivan that foreshadowed what the United Nations Technical Assistance Board and the International Bank of Development and Reconstruction have done in the post-World War II period. The League failed to implement the plan, but the Nansen International Office for Refugees later settled some 10,000 in Erivan and 40,000 in Syria and Lebanon.